First stop was Didube where many mini buses called marshruktas that go to all destinations north, south and west depart. I had a wander in the rain amidst the throng with drivers urging me to get on their bus (note to self… write out destination name in Georgian as almost none had destinations in English) so had I been traveling, I could have ended up anywhere! 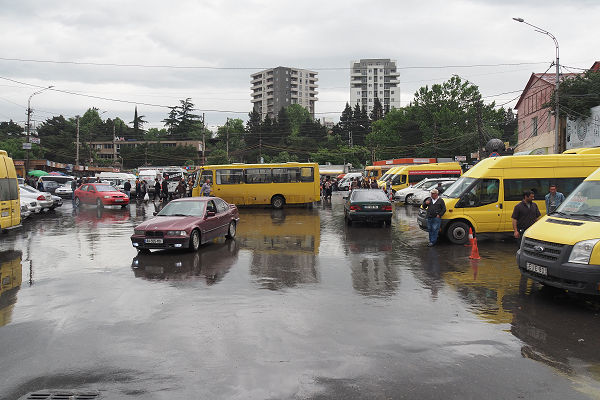 Eventually, after much searching and raised anxiety levels, I found metro entrance again and traveled to the end of the line, Akhmeteli Theatre. I suppose there is a theatre there. As it was still raining hard I searched the market (does every metro stop have a market? – have to find out) and eventually after wandering  amongst the rivers of water flowing between the stalls found a place that sold umbrellas. (Paying what I guess was an overly priced 20 GEL – A$12.50 despite saying Dizviri (expensive).)

Noticing on the map the station was near an artist friend I caught a taxi to his place (again the ‘tourist aspect came in and he wanted to charge me twice as much) for lunch and an afternoon toasting and drinking cha cha. (Think vodka but 30% higher alcohol and home distilled .. so I am lucky I can even write this…).

One thing about Georgia, is that wine is part of the culture. Not only culture but religion as well. Where else, on arrival at a guest house at 6am would you be welcomed with a glass of red wine. I suppose as I had been traveling all night it was really like end of day for me. And they did not drink with me.

So with the New Tbilisi Wine Festival being held only 1.7 km away according to Google maps, well via a walking trail, I thought why not! …..well why not indeed….read on.

Outside the gate of my guesthouse is a set of stairs that leads to what is locally known as the “Russian Church” and across the road is the start of the path.

The lower part of the path was quite popular, even a few shifty looking Georgian men perving on girls doing steps exercises. Same world over it seems. Oh and dodging the dog crap. Same all over it seems.

The view up the hill showed the giant Ferris wheel and the landmark telecommunications tower.

Eventually the path went from paved to dirt and the path soon offered several options as trodden dirt indicated several pathways. Part way along was an exercise yard and some pointed  questions  with some local youth ( pointed with fingers, yes) saw me heading up what seemed like minor paths through what was a quite delightful forest of native pines.

The path seemed to take me in the right direction till a fork and I went right and this took me on a precarious ridge that had me clinging to the fence that guarded the local Ferris wheel on one side and a knee trembling slope on the other. Stumble here and I would never be found.

Doubling back I took the left fork and eventually found an almost destroyed set of concrete steps that led to a fence, that fortunately had a gap and guess what! It revealed my destination and some perplexed locals wondering where this red-faced man had come from.

Let me tell you the Georgians really know how to put on a wine festival. Two hundred wine producers (most are small, because in Georgia wine is made ‘from the heart’ and going too big is contrary to maintaining the heartfelt connection) and what seemed like limitless opportunities to sample.

One aspect to understand about Georgian wine is there are two production methods: European style (AKA like you know how wine is normally made), and the Georgian method which is far simpler and steeped in history. It also produces wines that are distinctly different. Be unaware of this and you could be forgiven for screwing up your nose when tasting.  Accept the difference and drink up!

I had the delightful change to meet and listen to some local singers dressed in traditional garb, met up with my friend, famous local artist Zaliko (ask any person with kids if they know him and the response is YES! as he had a long running TV show teaching art for kids).

Another aspect that amazed me was compared with Australia where as the afternoon wore on behaviour would decline, here everyone was well-behaved. It was later explained to me that wine is always consumed as part of a celebration, and any excuse is good for a celebration, so wine is associated with happiness and good cheer. The effect seemed to rub off onto the non-Georgians as well.

I had the pleasure of lunching with a group of Georgian men who had a spare spot at their table and most of whom spoke good English. Conversion and regular top-ups of wine courtesy of the adjacent wine stands flowed easily for an hour or more.

Mindful of the need to face the mountain again I cut short my wine tasting – not too much fun on your own  – and after studying Google Maps saw another path down the steep hill. This I was delighted to find was a sealed path all the way with no shortage of steps, as my calves would attest later. There was also no shortage of affected wine tasters making their tottery way down as well.

The path took me past the Mtatsminda Pantheon of Writers and Artists (“Oh look a church” I said to myself – there is no shortage of them in this devoutly Christian country) and this proved a pleasant break, a chance to listen to some great singing in the church and to fill my water bottle from the local spring.

Finally to the bottom of the hill and a pleasant flat surface walking back to the Russian Church and the few steps to home.